become the best writer you can be

On Midsummer’s Day  Josie ran a workshop at the Artisan Gallery with writers who gathered to respond in words to the Puca MacGuffin show by artists Elizabeth Porter and Alex Stewart. 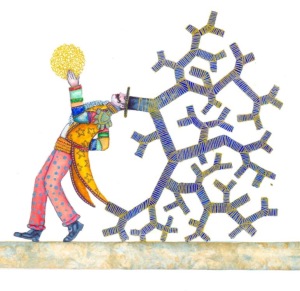 Alex and Lizzie write: as children the toys we loved most were the ones with which we could make our own worlds. Using lead soldiers, puppets and stuffed toys, trains and cars strewn across a landscape of cushion and carpet.We’d both had Pollock’s theatres and wondered if we could make our own.

We wanted to give writers the kind of treat visual artists have when they go  to museums and fill a sketchbook with ideas. So we developed  a series of playful exercises to help writers bring the characters in Lizzi and Alex’s work alive and encourage tale-telling, tall or otherwise, in a group.

Writing in a gallery can free you from self-imposed rules. You can give characters who are absurd, magical or abstract to begin with their own logic. Anything can happen.  When we respond to an artist’s work,  fragments of stories arrive from our own depths, wearing new clothes. A line can indeed go for a walk, a colour can soak a paragraph.

And there is a long tradition of artists and writers using miniature theatre to develop ideas and speak the unspoken. Like fairy stories, or cartoons in the late 20th century,  the tiny theatre is a form which became a children’s entertainment. But it has had a much wider audience throughout history. The French tradition of Guignol for instance, popular during the French Revolution, starred a  kind of Everyman for whom nothing was sacred. Alfred Jarry and his contemporaries in the early twentieth century credited the birth of Ubu Roi to playing Guignol theatre as students.

The poetry and imaginative work that came out of the day inspired some of the participants to carry on writing and Pearse & Black looks forward to seeing where this goes.

The first full-length course with Pearse & Black starts on Thursday, 9th January 2015 at a venue near Tottenham Court Road. The times of the course are 7pm to 9pm.

For information, please fill out the form below and we will get back in touch with you.